If you love extremes, and fighting big game sport fish is on your agenda, then Key West shark fishing charters are just for you. Hook one adult Bull Shark and you'll quickly find out why shark fishing is so addictive. Hook one on the flats, out on the reef, or in the Gulf - it doesn't matter where you catch a shark, you're in for a ride!

Of course there are smaller sharks out there, but we target the big boys for maximum sport. It's a lot of work, but what a thrill to finally see the monster you've fought when you bring him to the surface. Of course, it's catch and release for sharks, and touching the leader counts as a catch. Common sharks caught routinely on Key West shark fishing charters are Bull, Lemon, Reef sharks. Dusky sharks, Hammerheads, and Sharpnose sharks make frequent appearances as well. Less common but still out there are Tiger sharks. All the sharks are strong, even the Nurse Shark, which is not as aggressive or exciting to catch but still puts on quite a pull if you hook a large one.

Coolcast also does Key West shark fishing charters in the back country. Here, where the water is shallower and clearer, the best technique is most likely light tackle or fly. Using surface lures like poppers is quite exciting, since you'll most likely see the shark make the bite. Just imagine a hundred pound shark charging through the shallow water toward your surface lure as you brace yourself for the moment. The excitement comes from this moment of attack, when the shark's powerful jaws chomp down on your lure. It's quite possible to see and hear the attack, if the water is shallow enough. In a flats boat, you may have to prepare to be dragged along with the shark, as he pulls you, your guide, and your small boat through the water! Patience and hard work will pay off, as you slowly gain on him, reeling him in bit by bit. It's often a "two steps forward, one step backward" game, as the shark will get a burst of energy and make a run. Just hold on if he does, and wait til he stops. Then it's reel, reel, reel, nice and slowly, steady as she goes.

There's nothing quite like shark fishing in Key West, and if you love salt water sport fishing, you gotta try this! Imagine the force behind an adult Bull shark, feeling the power as you fight one-on-one. You will be proud for long after your day of fishing, once you've reeled in a big monster shark by yourself. Coolcast guides can make it happen for you, back country or reef, day or evening. All gear is provided- just be ready for some thrilling shark fishing action! 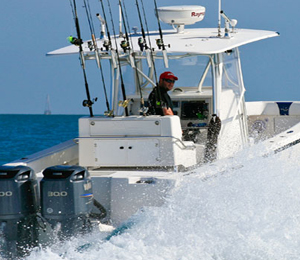 The Coolcast is Coolcast Charters' largest boat, and Captains Chris Garcia and Damon Santelli could possibly be the hardest working charter fishing guides in Key West! Captain Chris and Damon have both been known to fish 10 hour trips back to back and love every minute of it. 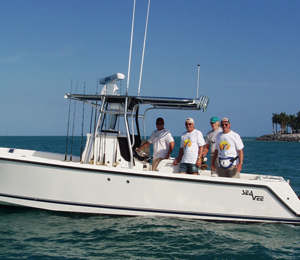 Aboard Captain Dan Smith's boat, the Outcast, you'll be made to feel right at home. By the end of the day, it'll feel like you've been fishing with an old buddy, and you'll already be thinking about coming back for more!